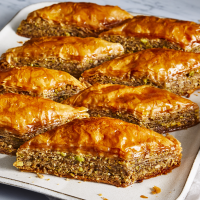 Baklava is a delicious Greek dessert made up of layers of crispy phyllo dough, honey and nuts that’s sooo easy to make. A Greek friend showed me how to make this fabulous recipe.

Baklava is a sweet dessert made of layers of phyllo filled with chopped walnuts and pistachios, soaked with honey syrup. This Turkish dessert is very popular in the middle eastern countries. Follow this recipe to learn how to make authentic baklava.

HOW TO MAKE BAKLAVA | KITCHN